On May 15 and 16, 2008, more than 400 labor negotiators, school district personnel, city, county, town and village officials, legislators, employee representatives, students and members of the general public having an interest in labor relations joined PERB and its co-sponsors in assessing the history and future of the Taylor Law. Picture of Chairman LefkowitzPERB Chairman Jerome Lefkowitz, who participated in the drafting of the law, opened the conference by offering an historical overview, along with commentary on the future direction of PERB and the Law.

Two notable highlights of the event were a dinner panel discussion with statewide employer and employee labor relations leaders, which was moderated by New York Times Labor and Economics Correspondent Steven Greenhouse and the announcement of the Harold R. Newman Memorial and Scholarship program at the Cornell ILR/Scheinman Institute on Conflict Resolution.

Picture of Rita Newman Former Cornell ILR School Dean David Lipsky, highly regarded mediator/arbitrator Martin Scheinman and PERB Director of Conciliation Richard Curreri, surprised and thrilled Rita Newman, former PERB Chairman Harold Newman’s widow, when they called her to the dais at lunch. The principals of the Scheinman Institute, long-time friends and protégés of Chairman Newman, presented Rita with a plaque that will identify the Harold R. Newman Conference Room at the ILR School and said that a scholarship/internship in Chairman Newman’s name would soon be available at the Institute. 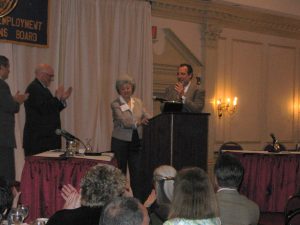 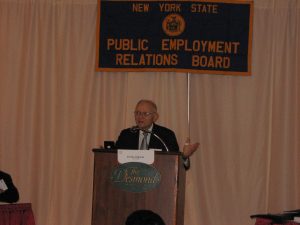